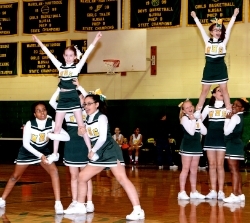 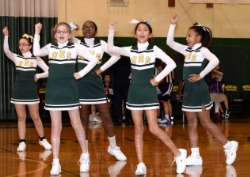 Middle School Cheer practices or performs at games
Tuesday - Friday throughout the winter season.   The team usually participates in one cheer competition per season (usually on a Saturday or Sunday).

The team benefits from being part of the successful Ram Cheerleading program.   For example, alumni of the varsity cheer team, some of whom are cheering for their college squads, regularly volunteer to attend summer camp with the younger cheerleaders, assisting and encouraging them.    The Middle School team is building a strong record of competitive success;  they almost always place in the top 3, and in 2016 won the championship of the Just Cheer competition.

Part of the way we build our skills and stay safe, our Stunt Progression.