Brendan Wagner has risen through the Rams’ coaching ranks, earning the respect of his peers for his work in a number of sports.  He first coached at W+H in the winter of 2012-13, as the Middle School Green Basketball Team's head coach.   A very good player at Colonia High School, he had begun coaching in Colonia's youth program during his playing days, developing his approach through several assignments with a variety of age-groups.   Coach Wagner later accepted responsibility for the Middle School Baseball and the Gold Soccer squads, proving his versatility.   He is a graduate of Kean University, with a degree in Health and Physical Education. Currently, he is a firefighter in the Woodbridge Fire Department, after previously working as a fitness room advisor at the Woodbridge YMCA and a personal trainer for the Fire Department. 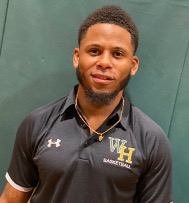 An outstanding Division I player, who played professionally in Europe, Trevis has returned to New Jersey to begin his coaching career, first at the Patrick School, then moving to Wardlaw+Hartridge beginning in the 2019-20 season.   A graduate of St. Peter’s Prep (where he was recognized as Conference Player of the Year) Trevis remained in Jersey City for college, earning All-MAAC basketball honors twice in his playing career at St. Peter’s.   His post-college professional career took him to Cyprus and Macedonia, before he accepted a coaching position at The Patrick School, prior to his joining the Rams.

Dario began coaching at W+H in the winter of 2019-20, but had significant prior playing and coaching experience, much of it in the GMC.   A 2013 graduate of JP Stevens HS, he played 3 sports for the Hawks, earning 3rd-team All-County honors in football at the quarterback position.   He matriculated at Kings College (PA) where he played Div. III football until injuries ended his playing career.   While completing his college education at Kean University (he received his degree in 2018), he began coaching for the state championship Sayreville HS Bombers.   He has also coached basketball and football at his alma mater, JP Stevens HS.

Dario has assumed responsibility as head JV coach for the Rams, while also serving as an assistant for the varsity team.