<Back to News
Austin Miller '20 Signs Commitment Letter to RIT 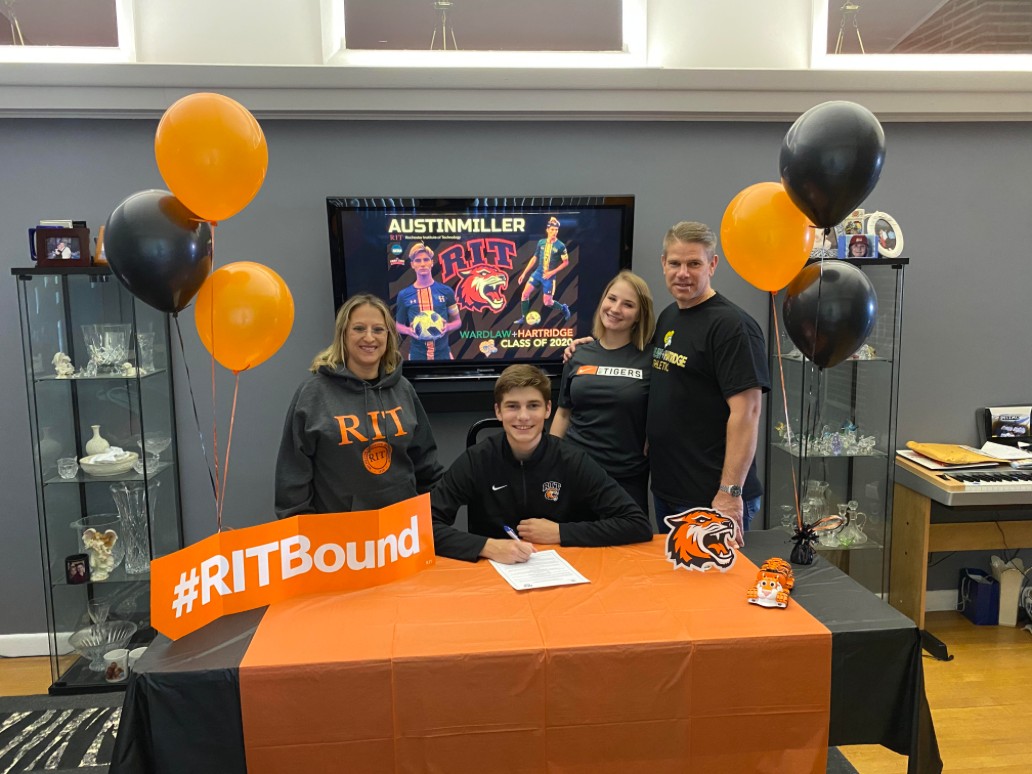 Austin Miller ’20 made his college commitment official during a virtual signing ceremony on April 28. The all-time leading scorer in Wardlaw+Hartridge boys’ soccer history is headed to Rochester Institute of Technology.

“I’m really excited,” Austin said. “I’ve been playing soccer my whole life and I’m going to do everything I can to have the best last four years of my career. The (RIT) campus is beautiful and I really connected with the coach and the team and I love the program I’m going to be in.”

The ceremony was held virtually via Zoom conference call and included Head of School Andy Webster, Athletic Director Karl Miran and head soccer coach Jason Montesinos,. Austin was joined at home by his parents, Fatima and Tim, and his sister, Aniston. Rudy Brandl ’83, Director of Communications, conducted the interviews.

Austin expects to make an immediate impact at RIT as a striker or winger. He led the Rams with consecutive seasons of 32 goals, a remarkable level of consistency for a player who was often marked by multiple defenders. Austin will graduate as the school’s all-time leading scorer with 64 goals.

Celebrating statistics was not the focus of the ceremony, as Austin reflected on the many highlights that made his scholastic experience memorable. He cited the hard work of his teammates and coaches, the wonderful support of his teachers and friends, and the amazing spirit of the full school community during the team’s surge to the state sectional finals last fall as things he’ll remember most about his W+H days.

“The whole school K-12 coming out and supporting us, that really made my high school experience,” Austin said. “That was extremely special.”

Austin plans to major in mechanical engineering with a dream of designing fast cars. Blessed with speed and skill, he’s been successful as a student and athlete thanks to hard work and determination. Austin is one of the leaders in the Class of 2020, a group of players that changed the culture in the W+H program.

“Austin’s class set the tone for the future and Austin deserves a lot of credit. It takes a lot for players to adjust and adapt to a new style of play and they really set the tone,” Coach Montesinos said. “In addition to his on-field production, he did all the little things. He worked hard in training and he made everybody believe in the system. I’m super proud of him.”