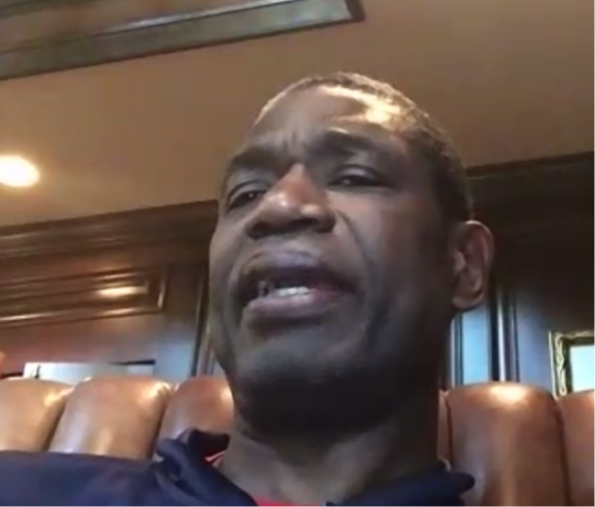 Former NBA star Dikembe Mutombo spent an hour sharing his inspiring story with Upper School students virtually on April 21. Although Mutombo is widely known and respected for his 18-year professional basketball career that includes a Hall of Fame induction and many other accolades, he takes great pride in his success in philanthropy. The central theme in his discussion with the students was making a difference in the world.

Mutombo credited his parents with instilling a strong sense of faith and morality that has carried him through his life. He enrolled at Georgetown University with a goal of becoming a physician but wound up being recruited to play basketball because of his tremendous height. He declined the offer as a freshman but joined the team as a sophomore and never looked back. Legendary Georgetown head coach John Thompson motivated and taught Mutombo how to develop into a great player. Mutombo became a first-round draft pick and ended his career as the second-most prolific shot blocker in NBA history.

“You have to go out and work hard for everything you get,” Mutombo said. “There’s nothing in life that will be given to you.”

Mutombo followed that sage advice with more precious pearls of wisdom later in his webinar with the students.

He spoke of the importance of making connections: “You want to have respect wherever you go. You have to make the best impression on everyone you meet because you don’t know where life will take you someday.”

He discussed his motivation for donating more than $30 million and creating the Dikembe Mutombo Foundation: “I’ve been blessed to make the money I did, and I have a moral obligation and duty to contribute and make a difference in society.”

Mutumbo also shared a few interesting and entertaining stories from his NBA and Georgetown days, including stories about playing against Hakeem Olajuwon and training for seven hours a day with Patrick Ewing.

He left the students with a final message of inspiration: “Go out and make a difference and make the world a better place. You want to give life and hope to someone. So many people need us out there.”