What's the Point of Play? September 2019

What’s the Point of Play?

How does a coach build a program to suit the different motives of adults and children? 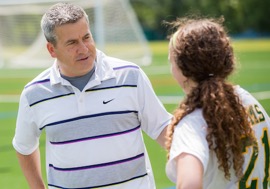 Cyndi Lauper may have become a star by singing “Girls Just Want to Have Fun,” but America has seldom allowed its young people to play a game solely for the enjoyment.  That creates the potential for a lot of conflict:  Adults have goals for their children: among other things, they want them to get a great education and a good job.  Boys and Girls are willing to buckle down for finite periods, but they also want to play, and have fun. The need to bridge that conflict helps define the attributes of a great coach.

The history of school sports has reflected the different perspectives on play held by the students who play the games, and the adults who supervise them.  Before the late 19thCentury, student attempts to play were frowned upon and restricted by teachers and school administrators. Schools wanted students to concentrate on their lessons, and spend more time studying – games and sport were seen as distractions from the real point of childhood: becoming an adult.  The schools with a Puritan background even equated games with the work of the devil.  Playing sports was an act of rebellion against faculty control of all aspects of their life by students.

When, in the 2ndhalf of the 19thCentury, schools decided the student’s demands for play had become too powerful to ignore, they began to sponsor athletic opportunities, building much of the apparatus of school sport within a few decades.  In order to do so, however, they needed a justification for allowing students so many hours away from their schoolwork. They found it in the English public schools, which had begun to promote rugby, soccer, and cricket as opportunities to build the skills and attitudes that would make men more masculine, preserve the gentlemanly virtues of the upper class, and create a new generation to run the Anglican Church and Foreign Service, preserving the Church and the Empire for the future. American headmasters who travelled across the Pond to learn from their British contemporaries (Endicott Peabody at Groton is one famous example) or read “Tom Brown’s School Days” (1857) felt confident in asserting that their new athletic teams were building “Muscular Christians”.

From that brief history, it is easy to see how the notion of sports “building character” came from.  Moreover, as societal goals have evolved, from moral virtue to business success, the type of character traits that athletics is supposed to develop has also evolved.  Still, the core notion that sport builds better men remains, exemplified by this sign in The Hill School’s wrestling room, erected by their long-time coach, Frank Bissell.

And yet…… “kids just want to have fun”.  My observation over the years is that students do not stay with a sport because it will please their parents, build their character, or make them better business competitors. They play because their friends are on the team, they play for fun, and, after they experience some success, they play because they enjoy that feeling of success.

Thus, the perfect coach needs to be an “institutional anarchist”, one who understands and promotes the school’s goals for sport, while also remembering the rebellious mindset that brings his young athletes out to the field. Young coaches have a special advantage, in that they can relate so well to the emotions of their athletes, including the anti-establishment desire for fun that motivates them.  Older coaches have had more time to learn the strategies and techniques of their sport, but the best ones stay young-at-heart, and maintain the young coach’s ability to speak the athlete’s language.