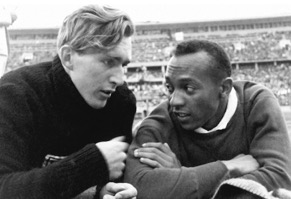 Because sport at the highest level includes international competition, it is tempting to think about the potential for world peace and global understanding inherent in athletes forming friendships at those events. For instance, one remembers the story of American Jesse Owens and German Luz Long bonding during the 1936 Berlin Olympic Long Jump, in open defiance to host Adolf Hitler’s theories of Aryan Superiority.

However heart-warming such stories can be, these stories of global engagement among top competitors are available only to the elite athlete, and do not have the power to change the world in the way that more commonplace athletic experience does. After all, Long’s embrace of Owens did not change history or alter his nation’s aggressive behavior. Even on a personal level, Owens and Long never saw each other again after the Olympic Games. Long joined the German army and died in the war.

Maybe more important is the role that athletic experience plays in developing building blocks to understanding the world. Although athletes are primarily focused on perfecting their skills and competing against the opponent, they also interact with the world in ways that remain vividly etched in their memory, due to the intensity of competition. In the same way that a young child’s experience with their family and their school community form building blocks for their understanding of larger, national and global communities, athletes augment their vision of the world through their experience.

Perhaps the best way to introduce the value of this athletically-gained knowledge is to review the oft-mentioned fact about the Inuit people and their many names for snow.

A person living in the suburbs may be able to function perfectly well in the winter by referring to “snow” and perhaps “slush” but for the residents of northern Canada, Alaska and Siberia, who may build igloos, hunt, and fish during their 6-7 months of winter, multiple words are necessary to describe different types of snow and its impact on their lives. For example, the Post article referenced above points out that: “aqilokoq” means “softly falling snow” and “piegnartoq” indicates “the snow [that is] good for driving sled,” to name just two. Understanding the Inuit culture and economy would require a student to learn those different words for different types of snow, as a window into the Intuit’s life.

Skiers also have many words for snow: Powder, crud, popcorn, corduroy, packed powder, boilerplate, ice, hardpack, and my new favorite: chicken heads. Because a skier feels the difference under her feet, and adapts her technique to master the type of snow she faces on a given day, the words take on a deep experiential meaning. The argument from this linguistic similarity is not that skiers are automatically more globally aware or globally engaged than the rest of the population.  Skiing is an expensive sport that is often enjoyed in elite resort settings. The point is that mastering a sport often includes learning a new language and skills that provide the mind with vivid examples.

We learn many things from playing sports that provide experiential understanding, and ultimately serve as building blocks for larger understanding. Some examples: